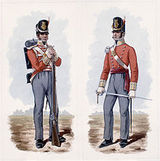 Description:
The 100th Regiment of Foot (Prince Regent's County of Dublin Regiment) was raised in Ireland in 1804 for service in the Napoleonic Wars. After a few weeks, Lieutenant Colonel John Murray was appointed to command; he was to remain in this post for most of the regiment's active service.

The 100th were transferred to Nova Scotia in 1805, with 271 men being lost when the troopship Aeneas was wrecked off Newfoundland. They were then stationed in Canada proper. In 1807, Colonel Isaac Brock, then serving on the staff in North America, reported favourably on the regiment while they were serving as garrison for Quebec City, and commented, "The men were principally raised in the north of Ireland, and are nearly all Protestants; they are robust, active, and good looking."

During the War of 1812 the regiment served on the Canadian frontier, first seeing action at the Battle of Sackett's Harbour in May 1813, and then at the Capture of Fort Niagara in December. From there, they were engaged on raids to Buffalo and Black Rock in late December.

In July 1814, they saw action at the Battle of Chippawa (or Street's Creek), where the regiment took heavy losses, reduced to "one Captain & 3 subalterns doing duty, with 250 effective men".Letter from Sir Gordon Drummond to Sir George Prevost, July 13, 1814 They then served at the Siege of Fort Erie in the closing months of the year. For their services in the defence of Canada, they...
Read More