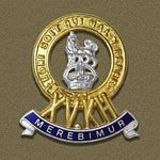 Description:
The 15th The King's Hussars was a cavalry regiment in the British Army. First raised in 1759, it saw service over two centuries, before being amalgamated into the 15th/19th Hussars in 1922.

The regiment was raised as the first of the new regiments of light dragoons in 1759, and named Elliots Light Horse, after George Augustus Eliott, 1st Baron Heathfield who had raised the regiment. It was then renamed the 15th Regiment of (Light) Dragoons. In 1759 the 15th was the first unit in the British Army to be awarded a battle honour "Emsdorf" for the Battle of Emsdorf in the Seven Years War. Other more senior units then applied to be awarded battle honours for previous campaigns and battles.

In 1819, the 15th played a small role in the notorious Peterloo Massacre, where a 60,000 strong crowd calling for democratic reform were charged by the Yeomanry. The charge resulted in 15 fatalities and as many as 600 injured. The 15th beat the crowds back with the flats of their swords.