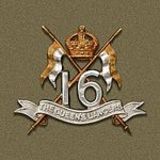 Description:
The 16th The Queen's Lancers was a cavalry regiment in the British Army, first raised in 1759. It saw service for two centuries, before being amalgamated into the 16th/5th Lancers in 1922.

They arrived in New York in September, 1776. They were involved in fighting at Brandywine, Paoli, and Monmouth Court House. They returned to Britain in December, 1778.