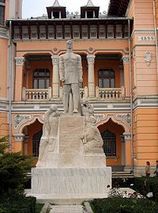 Description:
The 1907 Romanian Peasants' Revolt took place in March 1907 in Moldavia and it quickly spread, reaching Wallachia. The main cause was the discontent of the peasants about the inequity of land ownership, which was in the hands of just a few large landowners.

Most large landowners preferred to live in the cities and did not want to bother with the administration of their properties. Therefore, they leased their domains to intermediaries ("arendators"), in exchange for a fixed rent (arenda). The arendators in turn would administer the land and try to make a good profit in a short time. At that time, peasants formed up to 80% of the Romanian population and about 60% of them held very little or no land at all, while the large landowners owned more than half of the arable land.The anti-Semitic propaganda sought to blame the revolt on Jewish intermediaries. Many of these "arendators" were indeed Jewish, especially in Northern Moldavia. However, anti--Semitism does not explain the magnitude of the uprising, which rapidly spread to areas where there were very few or no Jewish intermediaries at all. In fact, the height of the uprising was in Oltenia (South-West of the country), where Jewish presence was minimal and where most of the intermediaries were Romanians.

The revolt began on the lands administered by one arendator, Mochi Fischer, in the village of Flămânzi (the name seems predestined, as it literally means "hungry...
Read More