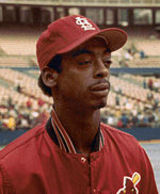 Description:
The World Series matched the St. Louis Cardinals against the Milwaukee Brewers, with the Cardinals winning in seven games.

Though the teams had never met, the cities had an existing commercial rivalry in the beer market, as St. Louis is the home of Anheuser Busch while Milwaukee is the home of Miller Brewing. This led to a few minor references to the Series being nicknamed the "Suds Series."

Paul Molitor set a World Series record with his fifth hit, in the ninth inning of Game 1. Robin Yount would set another record in the seventh inning of Game 5 by becoming the first player in Series history to have two four-hit games.

Cardinals catcher Darrell Porter was given the Series MVP award. Brewers pitcher Mike Caldwell, who won two games, would have been a strong candidate, as well as Molitor. Paul Molitor would eventually win the Series MVP Award 11 years later as a member of the Toronto Blue Jays. As it was,...
Read More