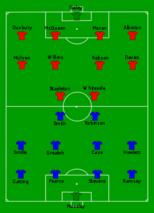 The first match finished 2-2 after extra time. Gordon Smith and Gary Stevens scored for Brighton; Frank Stapleton and Ray Wilkins for United. The first game is famous for the Radio commentary quote by Peter Jones "...and Smith must score" talking about a shot by Gordon Smith which was actually a save by the Manchester United goalkeeper Gary Bailey; the quote was subsequently used as a title for a Brighton Fanzine.

The second game on the Thursday night, started the same way the first game had, with Brighton taking the game to Manchester United. Although their chances were limited to long-range drives from Jimmy Case, United goalkeeper Gary Bailey had a couple of important saves to make. This all changed on 25 minutes, with United's first real attack. Alan Davies, who had made his FA Cup debut in the first game, set up captain Bryan Robson for a left-foot drive past Moseley into the corner of the net. Suddenly the atmosphere changed and it was the Manchester United fans who were singing loudest. This was compounded...
Read More