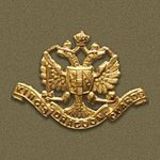 At the commencement of war in 1914 the KDGs were stationed in Lucknow, India as part of the Lucknow Cavalry Brigade. The regiment was ordered to France and arrived at Marseilles on 7 November. The KDGs formed part of 1st Indian Cavalry Division serving on the Western Front. The regiment returned to India in 1917 and joined 1st Division and during 1919 took part in the Third Afghan War.

The KDGs remained in garrison at Meerut until October 1918 when they exchanged stations with 21st Lancers and moved to Risalpur. On 2 May 1919 Afghan troops seized control of wells on the Indian side of the border. The Afghan Amir Amanullah was warned to withdraw, but his answer was to send more troops to reinforce those at the wells and to move other Afghan units to various points on the frontier. The KDGs were mobilised on 6 May and formed part of the British......
Read More