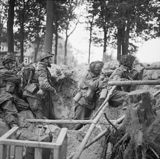 Formed from three parachute battalions as well as support units and assigned to the 1st Airborne Division, the brigade first saw action in Operation Biting&nbsp;– a raid on a German radar site at Bruneval on the French coast. They were then deployed in the Torch landings, and the following Tunisian Campaign, where it fought as an independent unit. In North Africa each of the brigade's three parachute battalions took part in separate parachute assaults. The brigade then fought in the front line as normal infantry until the end of the campaign, during which they earned the nickname the "Red Devils". Following the Axis surrender in North Africa, when 1st Airborne Division arrived in Tunisia the brigade once more came under its command. The brigade's next mission was Operation Fustian, part of the Allied invasion of Sicily. This was also the British Army's first brigade-sized combat parachute jump. Casualties in Sicily were reflected by the brigade being held in reserve for the division's next action Operation Slapstick, an amphibious landing at Taranto in Italy.

At the end of 1943, the brigade returned to England, in preparation for the invasion of North West Europe. Not required during the Normandy landings, the brigade was next in action at the Battle of......
Read More