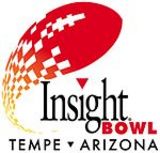 Description:
The 2006 Insight Bowl, a college football bowl game held on December 29 at Sun Devil Stadium on the campus of Arizona State University in Tempe, Arizona, pitted the Texas Tech Red Raiders against the Minnesota Golden Gophers. This game featured the biggest comeback in NCAA Division I FBS bowl history. The Red Raiders, after falling behind 38-7 with 7:47 remaining in the third quarter, rallied to score 31 unanswered points to send the game to overtime. The Gophers scored a field goal in overtime, but the Red Raiders responded with a touchdown to win.

The previous record bowl comeback was a 30-point comeback by Marshall against East Carolina in the 2001 GMAC Bowl.

The game was televised by the NFL Network, which as of December 31, 2006 has made the game available free for online viewing.

A decision by Red Raiders coach Mike Leach on their opening possession set the initial tone for the game. Tech faced a fourth-and-1 on their own 45-yard line, and Leach went for it. Quarterback Graham Harrell was stopped on a sneak, giving the ball to the Golden Gophers. Six plays later, Gophers QB Bryan Cupito connected on a 2-yard touchdown pass with tight end Jack Simmons.

The Raiders' next possession was even more disastrous for them, as Harrell was intercepted by Mike Sherels on Tech's 37 yard line. Amir Pinnix, who would run for 179...
Read More