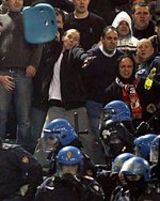 Description:
The 2007 AS Roma&ndash;Manchester United conflict occurred on 4 April 2007 at the Stadio Olimpico during the 2006-07 UEFA Champions League quarter-final match between AS Roma and Manchester United. In the conflict, missiles were thrown over a perspex barrier separating the two sets of supporters, which prompted the Italian riot police to enter and attempt to subdue the hostile crowd. The incident has been controversial, as the police and team supporters on both sides view the causes of and reactions to the melee differently.