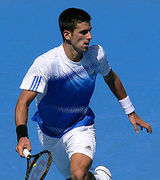 Description:
The 2008 Australian Open was a tennis tournament played on outdoor hard courts. It was the 96th edition of the Australian Open, and the first Grand Slam event of the year. It took place at the Melbourne Park in Melbourne, Australia, from 14 through 27 January 2008.

After twenty years of playing on Rebound Ace, the courts were changed to Plexicushion, a marginally faster surface. The new surface is notably thinner, and therefore has lower heat retention. This decision was made in a bid to reduce the "stick" of the court and the frequency of the extreme heat policy being invoked. However, the new surface faced criticism for being too similar to DecoTurf, the surface used at the U.S. Open.

For the mixed doubles, in every game, the first team to score four points, wins the game. In other words, should a deuce happen in a game, the team who wins the next point wins the game.

On 30 May 2007, Australian Open tournament director Craig Tiley announced that as of the 2008 Australian Open, the Rebound Ace surface that had been used since 1988 would be replaced by a newer, faster Plexicushion surface. The Rebound Ace surface had been criticized for several years, from players including Andy Roddick and Mark Philippoussis, who claimed that the...
Read More