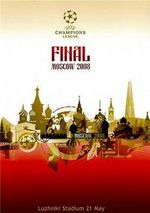 Description:
The 2008 UEFA Champions League Final was a football match that took place on Wednesday, 21 May 2008 at 20:45 CEST (22:45 MSD). The match was played at the Luzhniki Stadium, in Moscow, Russia, to determine the winner of the 2007–08 UEFA Champions League. The final was contested by Manchester United and Chelsea, making it an all-English club final for the first time in the history of the competition. This was only the third time that two clubs from the same country had contested the final; the others being the 2000 and 2003 finals. The game was won by Manchester United 6–5 on penalties, after a 1–1 draw following extra time.

In recent years, the Champions League final has been given an identity of its own with a unique logo, a design concept, and an overall theme. The objective is to help promote the final and enhance the prestige of one of the world's biggest sporting events. The initial idea that inspired the creation of a new identity for each final was to...
Read More