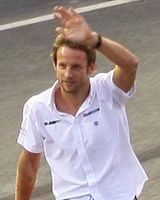 Description:
The 2009 Formula One season was the 60th FIA Formula One World Championship season. The season took place over 17 rounds, and started with the on 29 March 2009. It ended on 1 November 2009 with the inaugural .

Jenson Button and Brawn GP secured the driver and constructor titles respectively in the Brazilian Grand Prix, the penultimate race of the season. It was both Button and Brawn's first Championship success, Brawn becoming the first team to win the Constructors Championship in their début season. Button was the tenth British driver to win the championship, and following Lewis Hamilton's success in 2008 it was the first time the Championship had been won by English drivers in consecutive seasons, and the first time since Graham Hill (1968) and Jackie Stewart (1969) that consecutive championships have been won by British drivers. Also notable was the success of Red Bull Racing, as well as the poor performance of McLaren and Ferrari compared to the previous season.

Ten teams participated in the Championship after several rule changes were implemented by the FIA to cut costs to try and minimise the effect of the global financial crisis. There were further changes to try to improve the on-track spectacle with the return of slick tyres, changes to aerodynamics and the introduction of Kinetic Energy Recovery Systems (KERS) presenting some of the biggest changes in Formula One regulations for several...
Read More