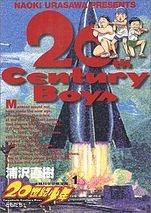 is a science fiction-mystery manga created by Naoki Urasawa. It won the 2001 Kodansha Manga Award in the General category, an Excellence Prize at the 2002 Japan Media Arts Festival, and the 2003 Shogakukan Manga Award in the General category. The last two volumes of the story were serialized under the name . The series makes many references to rock music as well as a number of 1960s-1970s anime; its title is based on T.Rex's famous song, "20th Century Boy".

Urasawa wrote 20th Century Boys along with another popular title, Monster, for two years (Monster ended in 2001). It was licensed by VIZ Media in 2005; however, at Urasawa's request, it has been rescheduled for release after Monster finishes its English serialization due to a change in art style over time.. Anime News Network. 9 July 2005

A live action movie adaptation, directed by Yukihiko Tsutsumi, was released in Japan on August 30, 2008, as the first part of a trilogy of films. The second film was released on January 30, 2009, with the final part being released August 2009 (Both the USA and Japan shared the same premiere date of the final film, with the U.S. premiere exclusively being at the VIZ Cinema in San Francisco).

In 1969, young boys Kenji, Otcho, Yoshitsune and Maruo build, in an empty field, a hideout they call their secret base, in which they and their...
Read More