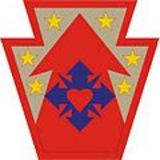 Description:
The 213th Area Support Group (ASG) is a unit of the Pennsylvania Army National Guard. The 213th ASG has the mission to provide all types of logistical support, except for medical supplies and ammunition, for up to 30,000 troops. Consisting of more than 1,000 soldiers from the eastern and central parts of the state, the 213th ASG is one of the two major commands in the Pennsylvania Army Guard, the other being the 28th Infantry Division.

The units of the Group continually provide support to units and organizations throughout the United States and the world. In 1997 the Group sent 50 members of its headquarters company to Hungary in support of NATO peacekeeping operations in Bosnia. One year earlier it had proved its mettle in providing combat service support to an active duty brigade during a field training exercise in Louisiana at the Joint Readiness Training Center. The 109th MPAD served in Bosnia itself from September 1999 to May 2000, producing command information material and providing support to civilian news media. The 28th Finance Battalion supports active Army missions in Korea, Italy, Germany, and Southwest Asia on a continuing basis. Currently, helicopters and crews from G Company, 104th Aviation are supporting an engineer task force building schools and clinics in Nicaragua. During blizzards, floods and civil emergencies, all the units of the Group stand ready to assist the communities and people of the Commonwealth.