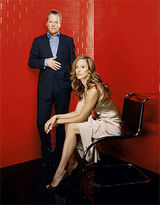 The Season Four storyline starts and ends at 7:00 am.

Additionally, "24: Conspiracy," minute-long Mobisodes (mobile phone episodes), 12 episodes in all, were created in 2005 as a promotion for Season Four. The episodes were originally seen by cell phone users in Europe and later in the United States as part of a Fox promotion for the show. The storyline continues to follow the Los Angeles branch of CTU.

For this season, Kiefer Sutherland won the Screen Actors Guild Award for Outstanding Performance by a Male Actor in a Drama Series, two years after his previous win.

Season Four is set 18 months after Season Three. Jack is now working for Secretary of Defense James Heller after being fired by CTU due to his heroin addiction. As the day begins, he gets caught up in an elaborate terrorist plot which involves both men and the daughter of Heller, Audrey Raines, who doubles as her father's chief policy assistant and Jack's lover. Jack is reinstated as CTU Director of Field Operations by Erin Driscoll, the Chief Director of CTU and the woman who fired him, who may have realized it was a mistake to...
Read More