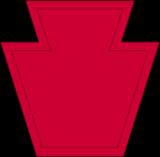 Description:
The 28th Infantry Division ("Keystone") is a unit of the Army National Guard and is the oldest division-sized unit in the armed forces of the United States. The division was officially established in 1879 and was later redesignated as the 28th Division in 1917, after the entry of America into the First World War. It continues its service today as part of the Pennsylvania Army National Guard.

It is nicknamed the "Keystone Division," as it was formed from units of the Pennsylvania Army National Guard; Pennsylvania is known as the "Keystone State". It was also nicknamed the "Bloody Bucket" division by German forces during the Second World War due to its red insignia. The 28th is the first Army National Guard division to field the Stryker infantry fighting vehicle, as part of the Army's modern transformation.