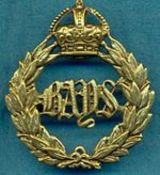 Description:
The 2nd Dragoon Guards (Queen's Bays) was a cavalry regiment in the British Army, first raised in 1685 by King James II. It saw service for three centuries, before being amalgamated into the 1st The Queen's Dragoon Guards in 1959.

When James II's throne was tottering, and William of Orange daily expected, the regiment was ordered to Torbay, when their helmets and cuirasses were deposited in the Tower, the officers having leave to wear the latter if they chose.

On the accession of William and Mary, the Bays, then designated Villiers' Horse, embarked for Ireland under Marshal Schomberg. The regiment fought at the battles of the Boyne (1690) and Aughrim (1691).

At Aughrim, in company with the Royal Horse Guards and another regiment, they crossed a seemingly impassable bog under a heavy fire, formed on the other side, and by a brilliant charge won the battle for King William. "It is madness," exclaimed the French general, St. Ruth, as he watched the apparently reckless manoeuvre; "but no matter, the more that cross the more we shall kill." It was but a few minutes after that his head was carried off by a cannon ball, and the decapitated corpse was buried secretly and hastily, that the heavy loss...
Read More