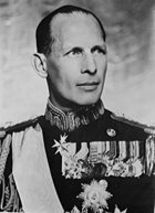 Description:
The 4th of August Regime (), commonly also known as the Metaxas Regime (), was an authoritarian regime under the leadership of General Ioannis Metaxas that ruled Greece from 1936 to 1941. There is some debate over how the regime relates to other authoritarian regimes of the era: those of Franco's Spain, Italian Fascism, and German Nazism. Richard Clogg argues that while the regime had "superficial trappings of Fascism" and Metaxas "did not disguise his admiration for Nazism and Fascism", it is "more correctly categorised as paternalist-authoritarian rather than fascist".

Origins of the regime

Metaxas imposed his regime primarily to fight the turbulent social situation prevalent in Greece in the 1930s, in which political factionalization had disrupted Greek parliamentary democracy. The sinking credibility of the Parliament was accompanied by several coup attempts; in March 1935, a Venizelist putsch failed and the following October elections reinforced the Royalist majority, which allowed the exiled King George II to return to Greece. The king re-established the monarchy in the country, but the parliament, split into incompatible factions, was unable to shape a clear political majority so that the government could govern. Meanwhile, the increasing activity of the Communists, whose 15 deputies from the 1936 elections held the balance between 143 Monarchists and 142 Liberals, Agrarians, and Republicans,...
Read More