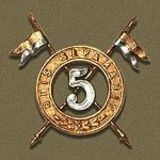 Description:
The 5th Royal Irish Lancers was a cavalry regiment of the British army originally formed in 1689 as James Wynne's Regiment of Dragoons.

They fought in the Battle of the Boyne and at the Battle of Aughrim under William of Orange. Renamed the Royal Dragoons of Ireland, they went on to serve with the Duke of Marlborough during the Spanish War of Succession and earned three battle honours there.

In 1751, they were retitled 5th Regiment of Dragoons and in 1756 the 5th (or Royal Irish) Regiment of Dragoons. As such, they served in Ireland and were active during the Irish Rebellion of 1798. However, they were accused of treachery; their accusers claimed their ranks had been infiltrated by rebels. (According to Continental Magazine, April 1863, the unit refused to attack a group of rebels.) This accusation appears to have been false, but nevertheless they were disbanded at Chatham in 1799.

Again according to Continental Magazine, "The circumstance was commemorated in a curious way. It was ordered that the 5th Royal Irish Light Dragoons should be erased from the records of the army list, in which a blank between the 4th and 6th Dragoons should remain forever, as a memorial of disgrace. For upward of half a century this gap remained in the army list, as anybody may see by referring to any number of that publication of half-a-dozen years back."

The regiment was reformed in 1858, keeping its old number and title, but losing precedence,...
Read More