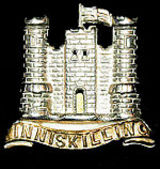 The 'Skins' (as they were known) are one of the four ancestor regiments of the Royal Dragoon Guards.

World War I sounded the death knell for mounted cavalry as it became apparent that technology had moved forward with greater destructive power and made horsed cavalry redundant on the modern battlefield. The British Army reorganised and reduced its cavalry corps by disbanding or amalgamating many of its famous cavalry regiments in 1922 as part of the Geddes Reforms the...
Read More