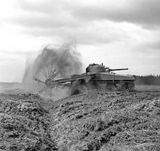 Description:
The 79th Armoured Division was a specialist British Army armoured formation created as part of the preparations for the Normandy invasion of 6 June 1944. The division operated armoured vehicles modified for specialist roles, intended to assist with the landing phase of the operation.

The division was formed as a standard armoured formation, but in March 1943, it was about to be disbanded for lack of resources. Alan Brooke (Chief of the Imperial General Staff), however, foresaw the need for specialised armoured vehicles and offered its command to Major General Sir Percy Hobart. Hobart accepted on the understanding that the 79th would be an operational division, not just a training and development one.

Hobart gave firm direction and the strange-looking tanks it developed and operated were known as Hobart's Funnies. They included tanks that floated, could clear mines, destroy defences, carry and lay bridges, and roadways - anything that would enable the invasion force to get ashore and break through the German defences. One less successful development was the Canal Defence Light a giant light intended to dazzle enemy gunners, although it was used to provide artificial daylight during the attack on the Geilenkirchen salient.

Initially, 79th Armoured Division also had the usual contingents of Royal Artillery, Royal Engineers and other Army units attached but these were removed after its change of role. After formation in October 1942, the 79th, based at the time mostly in...
Read More