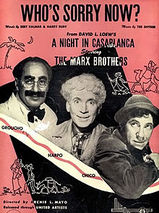 A Night In Casablanca

A Night in Casablanca

Description:
A Night in Casablanca (1946) was the twelfth Marx Brothers movie, starring Groucho Marx, Chico Marx, and Harpo Marx. The picture was directed by Archie Mayo and written by Joseph Fields and Roland Kibbee, and is generally considered one of the better of the Marx Brothers' later films.

Set in Casablanca shortly after World War II, escaped Nazi war criminal Heinrich Stubel (Sig Ruman) has steadily murdered three different managers of the Hotel Casablanca. Disguised as a Count Pfefferman, Stubel's goal is to reclaim the stolen art treasures that he has hidden in the hotel. However, the only way he can do this undetected is by murdering the hotel's managers and running the hotel himself.

The newest manager of Hotel Casablanca is former motel proprietor Ronald Kornblow (Groucho), who is very much unaware that he has been hired because no one else will dare take the position. Inept Kornblow takes charge of the hotel, and eventually crosses paths with Corbacchio (Chico), owner of the Yellow Camel company, who appoints himself as Kornblow's bodyguard, aided and abetted by Stubel's valet Rusty (Harpo). In his many efforts to murder Kornblow, Stubel sends beautiful Beatrice Reiner (Lisette Verea) to romance the clueless manager.

Before Stubel can make his escape to the airfield with the loot, Kornblow, his friends, and Miss Reiner invade his hotel room and sneak from suitcase to closet and back again to unpack his bags, which serves...
Read More