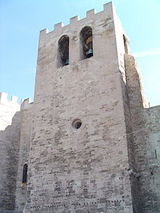 For the abbey near Paris see Abbey of St. Victor, Paris

The Abbey of St. Victor is a late Roman former monastic foundation in Marseille in the south of France, named after the local soldier saint and martyr, Victor of Marseilles.

In about 415, John Cassian founded two monasteries of St. Victor at Marseille, one for men (the later Abbey of St. Victor), the other for women.

In the fifth century the monastery of St. Victor and the church of Marseille were greatly troubled by the Semipelagian heresy, that began with certain writings of Cassian, and the layman Hilary and Saint Prosper of Aquitaine begged Saint Augustine and Pope Celestine I for its suppression.

In the eighth or ninth centuries both monasteries were destroyed by the Saracens, either in 731 or in 838, when the then abbess Saint Eusebia was martyred with 39 nuns. The nunnery was never re-established.

No rebuilding took place until the first half of the eleventh century when through the efforts of the then abbot, Saint Wiffred, the men's monastery was at last rebuilt. It soon recovered, and from the middle of the eleventh century its renown was such that from all points of the south appeals were sent to the abbots of this church to restore the religious life in decadent monasteries.

The abbey long retained contact with the princes of Spain and Sardinia and even owned property in Syria. The polyptych of Saint Victor, compiled in 814, the large chartulary (end of the eleventh and beginning of the twelfth...
Read More