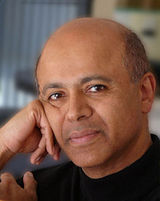 Description:
Abraham Verghese (born 1955) is the Professor for the Theory and Practice of Medicine at Stanford University Medical School and Senior Associate Chair of the Department of Internal Medicine. He was born in Ethiopia to parents from Kerala, India who worked as teachers. He is a Syro-Malabar Christian. Verghese, his father's Christian name, being Malayalam for George, is a very common Suriyani name. In 2009, Knopf published his new book and first novel, Cutting for Stone.

Dr. Verghese began his medical training in Ethiopia, but his education was interrupted during the civil unrest there when the Emperor was deposed and a military government took over. He came to America with his parents and two brothers (his elder brother George Verghese is now an engineering professor at MIT) and worked as an orderly for a year before going to India where he completed his medical studies at Madras Medical College in Madras, now Chennai. In his written work, he refers to his...
Read More