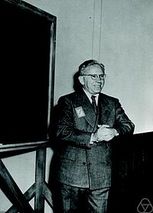 Description:
Abraham Wald ( &ndash; ) was a mathematician born in Cluj, in the then Austria–Hungary (present-day Romania) who contributed to decision theory, geometry, and econometrics, and founded the field of statistical sequential analysis. He spent his researching years at Columbia University.

Being a religious Jew, he could not attend school on Saturdays, as was required at the time by the Hungarian school system, and was thus home-schooled by his parents until college.

In 1927, he entered graduate school at the University of Vienna, from which he graduated in 1931 with a Ph.D. in mathematics. His advisor there was Karl Menger.

Despite Wald's brilliance, he could not obtain a university position, because of Austrian discrimination against Jews. However, Oskar Morgenstern created a position for Wald in economics. When the Nazis invaded Austria in 1938, the discrimination against Jews intensified. In particular, Wald and his family were persecuted as Jews. Wald was able to emigrate to the United States, at the invitation of the Cowles Commission for Research in Economics, to work on econometrics research.

Wald applied his statistical skills in World War II to the problem of bomber losses to enemy fire. A study had been made of the damage...
Read More