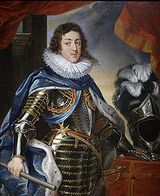 The 16th century was strongly influenced by religious conflicts developing out of the establishment of Calvinism and permanent wars. However, France’s critical position turned out to be of a central meaning for the formation and theoretical justification of absolute monarchy. Its disputes between monarchy and community as well as the fatal loss of the House of Valois' authority during the second half of the 16th century prompted nation-state theoretical reflections that led to a strengthening of the monarchic central power, so helped to overcome the monarchy’s crisis and to consolidate the internal and external political situation.

Though earlier French kings had tried to strengthen their power, which was scattered among the nobles, Absolute Monarchy was finally established during the reign of Louis XIII and...
Read More