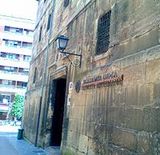 Academy Of The Asturian Language

Academy of the Asturian Language

Description:
The Academia de la Llingua Asturiana or Academy of the Asturian Language (ALLA) is an organization that promotes and regulates the Asturian language, a language of the Spanish autonomous community of Asturias. Among its principal objectives are investigating and normalizing the Asturian Language, developing a dictionary, promoting its use and education and awarding literary prizes. It has 21 full members, 19 foreign members and 15 honorary members, and its current (as of 2006) president is Ana Cano.

ALLA first notice appears in the 18th century, when Gaspar Melchor de Jovellanos and Carlos González de Posada talk in their letters about the idea of creating it in 1791. Jovellanos' project, however, was aborted because of his imprisonment in Majorca.

In 1920s the Real Academia Asturiana de las Artes y las Letras (Royal Academy of Asturian Arts and Letters) was created by some intellectuals, including José Antonio García Peláez (Pin de Pría). It was divided in four sections and its principal objectives were to create an Asturian dictionary and grammar and to publish a magazine. Other sections were dedicated to promoting Asturian literature, theatre and music.

But it was from 1980 when the Asturian pre-autonomous government, the Consejo Regional, approved the creation of the ALLA, founded the 15th of December of the same year. Xosé Lluis García Arias was its first president from that moment until 2001 when Ana Cano took over from him.