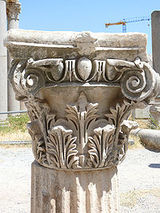 Description:
The acanthus is one of the most common plant forms to make foliage ornament and decoration.Philippa Lewis & Gillian Darley, Dictionary of Ornament (1986) Pantheon: NY

In architecture, an ornament is carved into stone or wood to resemble leaves from the Mediterranean species of the Acanthus genus of plants, which have deeply cut leaves with some similarity to those of the thistle and poppy. Both Acanthus mollis and the still more deeply cut Acanthus spinosus have been claimed as the main model, and particular examples of the motif may be closer in form to one or the other species; the leaves of both are in any case rather variable in form. The motif is found in decoration in nearly every medium.

In Ancient Greek architecture acanthus ornament appears extensively in the capitals of the Corinthian and Composite orders, and applied to friezes, dentils and other decorated areas. The oldest known example of a Corinthian column is in the Temple of Apollo Epicurius at Bassae in Arcadia, ca 450&ndash;420 BC, but the order was used sparingly in Greece before the Roman period. The Romans elaborated the order with the ends of the leaves curled, and it was their favourite order for grand buildings, with their own invention of the Composite, which was first seen in the Arch of Titus of 82 AD. Acanthus decoration continued in popularity in Byzantine, Romanesque and Gothic architecture, saw a major revival in the Renaissance, and...
Read More