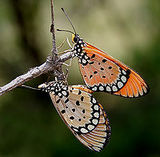 Description:
The Tawny Coster (Acraea terpsicoreBernaud, D. and Pierre, J. (1997) Acraea terpsicore (Linné), problèmes de nomenclature et données biologiques (Lepidoptera, Nymphalidae). Bull. Soc. Ent. Fr. 102(5):405-412) is a small leathery winged butterfly which is common in grassland and scrub habitats. It belongs to the Nymphalidae or brush-footed butterfly family. It has a weak fluttery flight. It is avoided by most insect predators. This species and the Yellow Coster Acraea issoria are the only two Indian representatives of the predominantly African tribe Acraeini.

Upperside tawny. Fore wing: a transverse black spot in cell, and another irregular, oblique and broader at the disco-cellulars ; a discal series of spots in interspaces 1, 3, 4, 5, 6 and 10, and the apex and termen black. The upper four spots of the discal series inclined obliquely outwards, the lower two obliquely inwards ; the black edging to apex and termen narrowing posteriorly, but with slender linear-projections inwards in the interspaces. Hind wing: a basal series of four or five black spots with a similar spot beyond in middle of cell and a subcostal black spot above it, followed by a discal series of obscure blackish spots and a minute postdiscal black dot in interspaces 4 and 6 respectively ; finally, a broad black terminal band medially traversed by a series of small spots of the ground-colour. Most of the macular black markings are obscure, being only the spots...
Read More