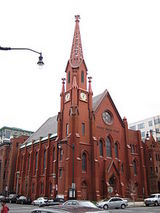 Description:
Adolf Cluss (July 14, 1825 – July 24, 1905) was a German-born American immigrant who became one of the most important architects in Washington, D.C., in the late 19th century, responsible for the design of numerous schools and other notable public buildings in the capital.

He was born in 1825 in Heilbronn in the Kingdom of Württemberg in south-west Germany. His father was a master builder, and young Cluss set out as an itinerant carpenter when he left Heilbrunn at age nineteen. In his travels, he met and became a friend of Karl Marx and a supporter of communist principles at a time of political and revolutionary ferment in Germany. He joined the Communist League and became a member of the Mainz Worker Council. The failure of the German revolutionary movement in 1848 led him to leave Germany when he was twenty-three, along with other Forty-Eighters who emigrated to the United States at that time. In the United States, he continued his political activity into the 1850s, maintaining an extensive correspondence with Marx and Engels and writing and publishing political articles for the German-American community.

Settling in Washington, D.C., Cluss also began building a highly successful practice as an engineer and architect. In...
Read More