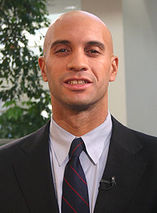 Description:
Adrian Malik Fenty (born December 6, 1970) was the sixth, and youngest Mayor of the District of Columbia. He is a national leader in urban education reform, having championed progressive strategies to fix the District's struggling public school system. He lost his re-election bid in the 2010 Democratic primary to Vincent C. Gray, who went on to win the general election for Mayor.

Fenty grew up in the Mount Pleasant neighborhood of Washington, D.C., and graduated from Mackin Catholic High School. As a teenager, he worked at Swenson's Ice Cream next to the Uptown Theatre.

Adrian Fenty is the middle child of three boys—older brother Shawn, a bicycle expert, and younger brother Jess. Their parents are runners and own a Fleet Feet athletic shoe store in the D.C. neighborhood of Adams Morgan. Adrian has run in the Cherry Blossom Ten Mile Run each year since 2004, improving his finishing time from 1:17:22 (2005) to 1:02:59 (2009).

Fenty earned a B.A. in English and Economics at Oberlin College and a J.D. from the Howard University School of Law. He...
Read More