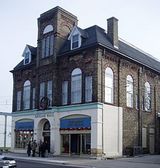 Description:
Aeolian Hall is a historic music venue in London, Ontario. The hall is currently located in a heritage building at 795 Dundas Street, at the corner of Dundas St. and Rectory St, just to the east of Adelaide St.

The structure was first built as the town hall of the then independent community of London East. The building was completed in 1884; however only a year later London East amalgamated with London. The building served a number of different purposes over the next decades, including serving as a fire station, court house, public library, school, and a number of businesses. The building was sold by the city in 1947 and it became home to a series of private businesses. The longest serving tenant was Frank C. Warder Radio Limited, which occupied the street level portion of the building from 1950 to 1982.

London's original Aeolian Hall was founded in 1947 by Gordon D. Jeffery who purchased the closed Beecher United Church in 1947 and turned it into a concert venue. This building burned down in 1967, and the next year Jeffery purchased the old town hall. Renamed Aeolian Hall it has served as one of London's premier musical venues ever since. The building is host to a wide range of events. It is home to the London Youth Symphony and London Community Orchestra, and hosts visiting performers from a wide array of genres.

Gordon Jeffery died in 1986 leaving the Hall to the Gordon Jeffery Trust to run and maintain as a musical venue for London. The Trust was nearing the end of its...
Read More