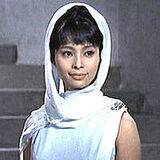 Description:
Aki, played by Akiko Wakabayashi, is a fictional character in the 1967 James Bond film You Only Live Twice.

Aki does not appear in Ian Fleming's 1964 novel. She was originally named Suki in Roald Dahl's screenplay. According to Steven Jay Rubin, dean of at the College of Arts and Sciences of Adelphi University, the character was "Dahl's tribute to the Japanese woman of the Sixties".Steven Jay Rubin, The James Bond Films: A Behind the Scenes History (p.75)

Suki was cast to be played by Mie Hama, but she had trouble learning English; to solve the problem, she and Wakabayashi, originally cast to play the part of almost-silent Kissy Suzuki, decided to swap their respective roles. Akiko then convinced director Lewis Gilbert to change the name of her character to Aki (meaning LightPaul Simpson, The Rough Guide to James Bond (p.11)

In You Only Live Twice Aki is portrayed as a beautiful, intelligent and capable young Japanese woman who works for the fictional Japanese Secret Intelligence Service (SIS). Despite her seemingly genteel manner, however, Aki can be professional when she needs to be and maintains a high standard of physical fitness, diplayed by her ability to survive her missions and avoid capture. She also showed immense courage, risking death several times during the mission and maintains a feeling of loyalty towards others in her missions,...
Read More