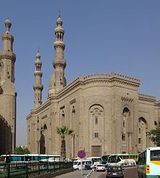 Description:
The Al-Rifa'i Mosque (, transliterated also as Al-Rifai,Al-Refai, Al-Refa'i, and named in English the Royal Mosque), is located in Cairo, Egypt, in Midan al-Qal'a, adjacent to the Cairo Citadel. The building is located opposite the Mosque-Madrassa of Sultan Hassan, which dates from around 1361, and was architecturally conceived as a complement to the older structure. This was part of a vast campaign by the 19th century rulers of Egypt to both associate themselves with the perceived glory of earlier periods in Egypt's Islamic history and modernize the city. The mosque was constructed next to two large public squares and off of several European style boulevards constructed around the same time.

The Al-Rifa'i Mosque was constructed in two phases over the period between 1869 and 1912, when it was finally completed. It was originally commissioned by Khushyar Hanim, the mother of the 19th century Khedive Isma'il Pasha to expand and replace the preexisting zawiya (shrine) of the medieval era Islamic saint Ahmad al-Rifa'i. The zawiya was a pilgrimage site for locals who believed that the tomb had mystical healing properties. Khushayer envisioned a dual purpose for the new structure as a house for sufi relics and a mausoleum for the royal family of Egypt. Over the course of its construction the architect, design, and purpose were changed.

The original architect was Husayn Fahmi Pasha al-Mi'mar, a distant cousin in the dynasty founded by Muhammad Ali in 1803. He died during the...
Read More