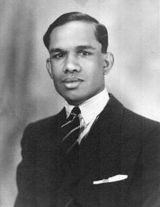 Dr. RM. Alagappa Chettiar was born in Kottaiyur in the Sivaganga District of Tamil Nadu to K.V.AL. Ramanathan Chettiar and Umayal Achi. He attended Presidency College at Chennai, where he became friendly with Sarvepalli Radhakrishnan, a model teacher who later on became President of India. In 1930 at the age of 21 he was the first M.A. (English Language and Literature) from the community of Nattukottai Nagarathars.

After his graduation he went to England to pursue the study of Law. He qualified for the Bar at Middle Temple in England and became a ' Bar-at-Law ' to be cherished by the people of Chettinad. Adventurous by nature he was awarded a pilot certificate at Croydon, London. During this time he became the first Indian trainee in the Chartered Bank, London.

His stellar record as a business entrepreneur was acknowledged by the British Government and he was knighted in 1945 at the age of 37, a title which he renounced when India attained independence. The President of India on January 26, 1956 conferred the distinction of Padma Bushan on him. He proved himself a versatile business tycoon and an intrepid academician with a vision to change the mere scrub jungle of Karaikudi to an educational Mecca. When...
Read More