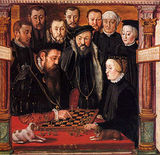 Albert was educated at Ingolstadt under good Catholic teachers. On 4 July 1546 he married Anna of Austria, a daughter of Ferdinand I, Holy Roman Emperor and Anna of Bohemia and Hungary (1503&ndash;1547), daughter of King Ladislaus II of Bohemia and Hungary and his wife Anne de Foix, the union was designed to end the political rivalry between Austria and Bavaria. In 1550 Albert succeeded his father as duke of Bavaria.

Albert was now free to devote himself to the task of establishing Catholic conformity in his dominions. A strict Catholic by upbringing, Albert was a leader of the German Counter-Reformation. Incapable by nature of passionate adherence to any religious principle, and given rather to a life of idleness and pleasure, he pursued the work of repression because he was convinced that the cause of Catholicism was inseparably connected with the fortunes of the house of Wittelsbach. He took little direct share in the affairs of government, nevertheless, and easily lent himself to the plans of his advisers, among whom during the early part of his reign were two sincere Catholics, Georg Stockhammer and Wiguleus Hundt. The latter took an important part in the events leading up to the treaty of Passau (1552) and the peace of Augsburg (1555).