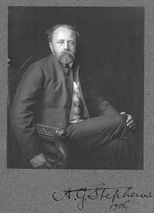 Description:
Alfred George Stephens (A.G. Stephens; 28 August 1865 - 15 April 1933) was an Australian writer and literary critic, notably for The Bulletin. He was appointed to that position by its owner, J. F. Archibald in 1894.

Stephens was born at Toowoomba, Queensland. His father, Samuel George Stephens, came from Swansea, Wales, and his mother, originally Euphemia Russell, was born in Greenock, Scotland. He was educated at Toowoomba Grammar School until he was 15, and had a good grounding in English, French, and the classics, but his education was later much extended by wide reading. His father was part-owner of the Darling Downs Gazette, and in its composing room the boy developed his first interest in printing.

On leaving school he was employed in the printing department of William Henry Groom, proprietor of the Toowoomba Chronicle, and later in the business of A. W. Beard, printer and bookbinder of George Street, Sydney. He was learning much that was to be invaluable to him in his later career as journalist and editor. He returned to Queensland and in 1889 was editor of the Gympie Miner. A year or two later he became sub-editor of The Boomerang at Brisbane, which had been founded by William Lane in 1887, but though this journal had able contributors it fell into financial trouble, and in 1891 Stephens went to Cairns to become editor and part proprietor of the local Argus.

On the Boomerang he had had valuable experience as a reviewer of literature, on the......
Read More