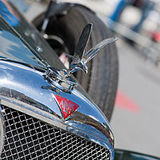 History of the company

The original company, T.G. John and Company Ltd., was founded in 1919 by Thomas George John (18801946). Its first products were stationary engines, carburetors and motorscooters. Following complaints from the Avro aircraft company whose logo bore similarities to the original winged green triangle, the more familiar inverted red triangle incorporating the word "Alvis" evolved. On December 14, 1921, the company officially changed its name to The Alvis Car and Engineering Company Ltd. Geoffrey de Freville (18831965) designed the first Alvis engine and is also responsible for the company name.

The origin of the name Alvis has been the subject of a great deal of speculation over the years. Some have suggested that de Freville proposed the name Alvis as a compound of the words "aluminium" and "vis" (meaning "strength" in Latin), or perhaps it may have been derived from the Norse mythological weaponsmith, Alvíss. De Freville however vigorously rejected all of these theories. In 1921, he specifically stated that the name had no meaning whatsoever, and was chosen simply because it could be easily pronounced in any language. He...
Read More