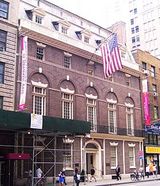 Description:
The American Academy of Dramatic Arts (AADA) is a fully accredited two-year conservatory with facilities located in Manhattan, New York City &ndash; at 120 Madison Avenue, in a landmark building designed by noted architect Stanford White as the original Colony Club &ndash; and in Hollywood, California &ndash; at 1336 North La Brea Avenue, in a new building on the site of the former studios of Charlie Chaplin.

The oldest acting school in the English speaking world, the Academy in New York was founded in 1884 to train actors for the stage. In 1974, the Academy opened another campus in Pasadena, California, which made it the only professional actor training school in both major centers of American theatrical activity. The Los Angeles campus moved from Pasadena to Hollywood in 2001.

The Academy remains dedicated to training professional actors. It now offers courses in film and television, as well, providing a structured, professionally oriented program that stresses self-discovery, self-discipline and individuality. Students who graduate in New York receive an Associate of Occupational Studies degree; students who graduate in Hollywood receive a Certificate of Completion or an Associate of Arts degree in Acting. Students from both New York and Los Angeles can receive a Bachelor of Arts degree from selected universities.

Numerous students of the Academy have gone on to distinguished careers throughout the entertainment industry, receiving nominations for Tony, Oscar and...
Read More