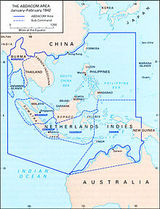 Description:
The American-British-Dutch-Australian (ABDA) Command, or ABDACOM, was a short-lived, supreme command for all Allied forces in South East Asia, in early 1942, during the Pacific War in World War II. The main objective of the command, led by General Sir Archibald Wavell, was to maintain control of the "Malay Barrier" (or "East Indies Barrier"), a notional line running down the Malayan Peninsula, through Singapore and the southernmost islands of Dutch East Indies. ABDACOM was also known in British military circles as the "South West Pacific Command", although it should not be confused with the later South West Pacific Area command (see below).

Although ABDACOM was only in existence for a few weeks, and it presided over one defeat after another, it did provide some useful lessons for combined Allied commands later in the war.

Efforts to organise the ABDA Command began soon after war between the Allies and Japan commenced, on 7 December 1941. On December 29, Winston Churchill said that it had been agreed Wavell would be supreme commander. Wavell then held the position of British Commander-in-Chief, India. Churchill added:

It is intended that General Wavell should have a staff in the south Pacific accessible as Foch's High Control Staff was to the Great Staffs of the British and French armies in France . He would receive his orders from an appropriate joint body who will be responsible to me as...... ...
...