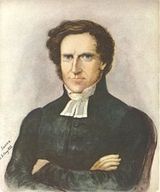 Fryxell was born at Edsleskog, Dalsland, (now part of Åmål Municipality, Västra Götaland County) on the 7th of February 1795. He was educated at Uppsala University, took holy orders in 1820, was made a Doctor of Philosophy in 1821, and in 1823 began to publish the great work of his life, the Stories from Swedish History. He did not bring this labor to a close until, fifty-six years later, he published the forty-sixth and crowning volume of his vast enterprise.

Fryxell, as a historian, appealed to every class by the picturesqueness of his style and the breadth of his research; he had the gift of awakening to an extraordinary degree the national sense in his readers. In 1824 he published his Swedish Grammar, which was long without a rival. In 1833 he received the title of professor, and in 1835 he was appointed to the incumbency of Sunne, in the diocese of Karlstad, where he resided for the remainder of his life. In 1840 he was elected to the Swedish Academy in succession to the poet Johan Olof Wallin (1779&ndash;1839). In 1847 Fryxell received from his bishop permission to withdraw from all the services of the Church, that he might devote himself without interruption to historical investigation.

Among his numerous minor writings are prominent his Characteristics of Sweden between 1592 and 1600 (1830), his Origins of the Inaccuracy with which the History of Sweden in Catholic Times has been Treated...
Read More