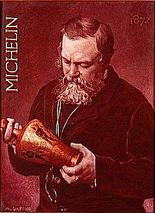 In 1900, André Michelin published the first Michelin Guide, the purpose of which was to promote tourism by car, thereby supporting his tyre manufacturing operation.

In 1886, 33-year-old Andre Michelin abandoned his career as a successful Parisian engineer to take over his grandfather's failing agricultural goods and farm equipment business. Established in 1832,"Michelin et Cie" suffered from neglect and was on the verge of insolvency following the founder’s death. Michelin’s grandfather had started the company that sold farm equipment and an odd assortment of vulcanized rubber products, such as belts, valves and pipe. As soon as Andre took the helm of the company, he recruited his younger brother Edouard to join him at the company. Edouard was named the company’s managing director. While duly committed to the success of the business, neither brother had any prior experience selling goods or had the slightest idea where to even begin.In 1889 a cyclist familiar with the Michelin Company approached Edouard with his flat tyre seeking assistance. Getting a flat tyre frequently meant cyclists were left stranded for hours. In the late 1880s, cycling was becoming a popular form of transportation...
Read More