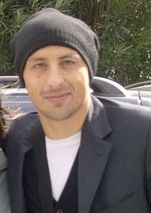 Description:
Angelo Palombo (born 25 September 1981, in Ferentino, Province of Frosinone) is an Italian footballer who plays as a midfielder for Serie B club Sampdoria. Tenacious in the tackle and hard-working on the pitch, he is known for his play-making skills and never-say-die attitude. He is the current captain and longest-serving player in the squad.

Palombo started his career at Fano, being a youth product, he was later on sold to Fiorentina and made his Serie A debut on 10 February 2002 against Venezia. He moved to Sampdoria, then in Serie B, on a free transfer in the 2002 summer transfer window when Fiorentina declared bankruptcy and were forced to put their players on sale. After helping the Ligurian club gain promotion that season, he established himself as an integral part of the side. During the 2005–06 season, he scored his first Serie A goal for Sampdoria on 18 January 2006 against his boyhood club Fiorentina and made his European debut in the UEFA Cup in September. He is now undisputed first choice in centre midfield alongside youngster Andrea Poli.

Palombo was in the Italy U-21 team that won the 2004 European Under-21 Football Championship and achieved bronze medal of the 2004 Summer Olympics football tournament.

Palombo made his Italy national team debut in the 0–2 defeat to Croatia on August 16, 2006, coming as a substitute for......
Read More