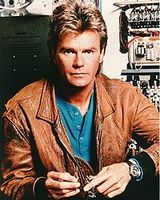 Description:
Angus MacGyver, known as just MacGyver or Mac until the final season of the American spy television series MacGyver, is the highly intelligent, optimistic action hero played by Richard Dean Anderson. He prefers non-violent conflict resolution wherever possible and refuses to carry or use a gun. MacGyver works as a problem solver for the fictional Phoenix Foundation in Los Angeles. Educated as a scientist and with a background from a fictional United States government agency, the Department of External Services (DXS), he is used as a resourceful secret agent able to solve a range of problems. In addition to his scientific knowledge and inventive use of common items, he always carries a Swiss Army knife and duct tape.

The character is portrayed as an outspoken advocate of gun control, although the pilot episode shows MacGyver using a gun on a mission shown in the opening gambit. Even in cases where his improvised devices are used to attack hostile opponents, he is always doing so in self-defense and, if possible, subduing or disabling rather than killing. He is often suspicious of militaristic attitudes within the government; he sees his Phoenix Foundation employer as an alternative to the more conventional (and violent) means of law enforcement.

MacGyver is also passionate about social causes, having on several occasions volunteered to help the less-privileged. For example, he conducts hearing research at a school for deaf children,Season 2, Episode 9...
Read More