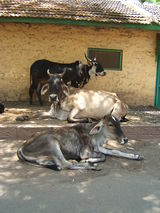 Description:
A large number of farmers in India depend on animal husbandry for their livelihood. In addition to supplying milk, meat, eggs, and hides, animals, mainly bullocks, are the major source of power for both farmers and drayers. Thus, animal husbandry plays an important role in the rural economy. The gross value of output from this sector was in FY 1989, an amount that constituted about 25 percent of the total agricultural output of .

In FY 1992, India had approximately 25 percent of the world's cattle, with a collective herd of 193 million head. India also had 110 million goats, 75 million water buffalo, 44 million sheep, and 10 million pigs. Milk production in FY 1990 was estimated to have reached 53.5 million tons, and egg production had reached a level of 23.3 billion eggs. Dairy farming provided supplementary employment and an additional source of income to many small and marginal farmers. The National Dairy Development Board was established in 1965 under the auspices of Operation Flood at Anand, in Gujarat, to promote, plan, and organize dairy development through cooperatives; to provide consultations; and to set up dairy plants, which were then turned over to the cooperatives. There were more than 63,000 Anand-style dairy cooperative societies with some 7.5 million members in the early 1990s. The milk produced and sold by these farmers brought a day, or more than a year. The increase in milk production...
Read More