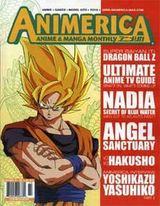 Description:
Animerica is a quarterly digest published by Viz Media. It initially started as a monthly magazine featuring reviews of anime and manga titles, as well as related works. After a preview issue was released in November 1992, the magazine's first issue was released in February 1993 with a March 1993 cover date. The magazine originally featured articles and reviews on manga, anime, and related media, as well as manga preview chapters. In 1998, Animerica Extra was launched as a manga anthology which eventually focused specifically on shōjo titles. It was canceled in 2004.

Viz changed the magazine's format in April 2005, with the new magazine being three different free publications of the same name. One is advertising-oriented and created specially for distribution at anime and manga conventions while the other is more general in scope and with a version each for distribution through Waldenbooks and Borders stores. A similar version was later added for BestBuy stores. All three versions have fewer and briefer articles and a lower page count.

Animerica was one of the first professional anime and manga magazines released in the United States, and one of the most popular in the 1990s. In 2004, it had a circulation of 45,000 readers, but low sales and high competition from NewType USA resulted in the essential cancellation of the original magazine and its reformatting as a free digest. 100 copies of the first issue of the free digest were sent to 1,000 Waldenbooks and Border......
Read More