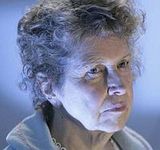 Description:
Anne Reid, MBE (born 28 May 1935) is a BAFTA Award-nominated English film and television actress from Newcastle upon Tyne, best known for her roles as Valerie Tatlock in Coronation Street and Jean in dinnerladies.<!-- lower case is the usual form -->

Reid was appointed Member of the Order of the British Empire (MBE) in the 2010 Birthday Honours.

Reid's first major acting role was as the character of Valerie Tatlock (later Barlow) on Coronation Street. Her character was very popular with the fans with Valerie's marriage to Ken Barlow being an early example of a soap supercouple. Her character Valerie was the mother of the twins Susan and Peter. Reid joined the cast, initially for two months, starting in August 1961 and leaving in October 1961. She returned to the programme to marry Barlow on 1 August 1962 in a wedding watched by 15.8 million viewers. Her character was very popular and in 1965 when she and Barlow had twins, Granada TV received numerous flowers, cigars, candies, and cards addressed to "Mrs Barlow" as congratulations. An estimated 17.8 million watched the christening episode of the twins.

In 1968 Reid played one of the most difficult parts in Coronation Street, when Valerie Barlow was held hostage by a rapist. Although Mrs Barlow wasn't harmed, viewers sent in hate mail to the actor who played the rapist. In November 1970 Reid announced she was leaving Coronation Street as she was now...
Read More