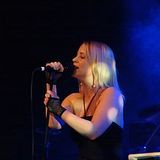 After completing secondary school, Annie started DJing in Bergen, where she met house producer and future boyfriend Tore Kroknes. In 1999, Annie and Kroknes released the single "The Greatest Hit", which sold out in two days and became popular in Norwegian and British nightclubs. Before Annie and Kroknes could release an album, Kroknes died from a congenital heart defect in 2001. Annie went on to sign a record deal with Britain's 679 Recordings in 2003, releasing her debut album Anniemal in 2004, for which she received widespread critical acclaim and several Norwegian music awards.

Annie has been praised for her unique, "indie" style of electropop and synthpop music and has been described as "a pop singer with credibility, an indie artist with one eye on the dancefloor", and "the Kylie it's cool to like". Annie describes her music as "pop with strange edges."