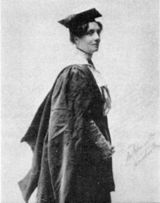 Description:
Annie Elizabeth Fredericka Horniman CH (3 October 1860 – 6 August 1937) was an English theatre patron and manager. She established the Abbey Theatre in Dublin and founded the first regional repertory theatre company in Britain at the Gaiety Theatre in Manchester. She encouraged the work of new writers and playwrights, including W. B. Yeats, George Bernard Shaw and members of what became known as the Manchester School of dramatists.

Annie Horniman was born at Surrey Mount, Forest Hill, London, in 1860, the elder child of Frederick John Horniman and his first wife Rebekah née Elmslie. Her father was a tea merchant and the founder of the Horniman Museum; her grandfather was John Horniman who founded the family tea business of Horniman and Company. Annie and her younger brother Elmslie were educated privately at their home. Her father was opposed to the theatre, which he considered was sinful, but their German governess took Annie and Elmslie secretly to a performance of The Merchant of Venice at The Crystal Palace when Annie was aged 14.Peter Cheeseman, ‘Horniman, Annie Elizabeth Fredericka (1880–1937)’, Oxford Dictionary of National Biography, Oxford University Press, Sept 2004; online edition January 2008 , accessed 24 November 2008

Annie's father allowed her to enter the Slade School of Fine Art in 1882. Here she discovered that her talent in art was limited but she developed other...
Read More